A prominent road familiar to many in the area, Thackeray’s Lane Arnold is named after local manufacturer and politician Joseph Thackeray and his family. Thackeray, a lace manufacturer, came to Nottingham from Manchester in the 1780s, due to outbreaks of machine breaking around the Lancashire area at that time.

Firmly establishing himself in Nottingham, the business in time passed down from father to son, before ultimately passing to Joseph’s grandson John Lawson Thackeray. The business continued to evolve under the direction of John Lawson Thackeray, with the building and establishing of the large Forest Mills lace factory at Radford in 1840. The products produced at this factory were of an extremely high quality and much sought after; demand for their products was high. At the Great Exhibition held in London in 1851, Thackeray’s lace thread was awarded a Gold Medal, subsequently gaining the family a worldwide reputation for excellence. With such a high honour it soon led to full order books from clients, and in turn, business continued to boom. Around this time, Thackeray took on a partner, Thomas Hickling, and the company continued to trade as Thackeray and Hickling. Thackeray was very mindful of his civic responsibilities and became involved in local politics; he joined the Radford Board of Health which was the forerunner of the local council, becoming its chairman, having been elected to represent the Nottingham Park Ward in 1853. When Radford became a part of the city of Nottingham, Thackeray was elected onto the council and eventually became Alderman. He was inaugurated Mayor of Nottingham in 1853/54 and again in 1866/67. As business continued to flourish, Thackeray decided to expand some of his other interests. In 1858, he became a director and trustee of one of the first building societies, the Nottingham and Midland Counties Permanent Benefit Building Society.

It was also around this time that John Lawson Thackeray acquired an area of land in Arnold, at Arnot Vale, building a large family home known as ‘Arnot Vale House’ on the site. The house was situated near to the large traffic island currently on Thackerays Lane. Thackerays Lane originally formed a long driveway which led to this once grand house. By 1870, Thackeray and Hickling had decided to part company, and subsequently the partnership was dissolved with Thackeray taking over the assets of the company. The business continued to prosper however, and in 1876 and 1878 two patents were issued for the design of machinery for the doubling of cotton and other threads.

In 1879 Thackeray’s eldest daughter Sarah Kate married Horace Arthur Fisher, a Lace Manufacturer from Nottingham and for a time Kate Horace and their ever expanding family lived at ‘The Hills’ Bramcote. John Lawson Thackeray died on 3rd December 1886, his death reported in the Nottingham Post: “J. L. THACKERAY, J.P. It is with regret we announce the death of Mr. John Lawson Thackeray, J.P., which occurred at his residence, Arnot Vale, near Arnold, on Saturday evening. Mr. Thackeray, who was 74 years of age, had not enjoyed good health during the last few years.” Thackeray left a personal estate to the value of £30,721.5s. Less than three years after the death of John Lawson Thackeray in 1889, the Nottingham Suburban Railway was completed. A station was sited nearby at Daybrook and the railway line crossed over a bridge on Thackerays Lane, close to the site of Arnot Vale House. The census taken in 1911 shows that Sarah Kate and her husband Horace Arthur Fisher had moved from Bramcote; they and their family were now living in Arnot Vale House. Not all went well for this notable local family; sadly, the family were to experience great tragedy when two of John Lawson Thackeray’s grandson’s were killed whilst fighting in France during WW1. In 1950, Thackeray & Sons, the company that JL Thackeray had formed at Forest Mills, finally closed. The demand for lace had declined, and the company had failed to upgrade its equipment to the more modern standards required. The mill buildings were finally demolished in May 2019, with plans in place for commercial units and apartments and a further 229 homes to stand on the now vacant site. Arnot Vale House was demolished in the mid 1930’s, the land sold to make way for housing. The area is now completely covered by housing; and a school also stands on what was once a part of the extensive gardens to Arnot Vale House. Two eminent local families after which, both Thackerays Lane and Fisher Avenue take their names. 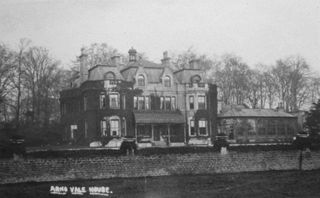 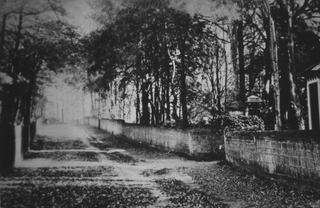 Thank you, really enjoyed reading this article as I lived on Thackeray’s Lane and my Mum stills lives there’s after 50 years in the same house.

Found this so interesting as I once lived on Thackerays Lane.I actually found a marble ash coffin in the garden, probably brought back from Thackerays travels.

According to the documentation associated with the deeds for our house on Marlborough Road, John Lawson Thackeray died on 4th September 1886, not in December. The will was proved on 3rd December 1886.

Sandra, we contacted Bonington House about the trophy you refer to but unfortunately have been unable to locate it, if you could provide more information, we may be able to look into it further. Lynne

Hi Sandra, we will look into this for you and post a reply on this site as soon as we have any information. Lynne

Hello TimA picture is now on gallery page requested pictures. The exhibition in Arnold library is about Front Street